I scribbled this down on our whiteboard last Friday, trying to explain how Pylons and Paste fit together. Prevously jdub and Lindsay had asked me similar questions. Until Friday, I wasn’t even sure myself. 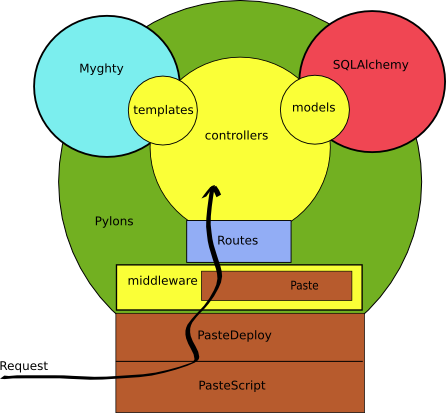 The first thing to note is that Paste is not a framework or single library, it’s a collection of components that by themselves don’t do a lot, but with their powers combined form a set of useful and sometimes essential tools for building a web application in Python.

Paste implements an interface known as WSGI, aka the Web Server Gateway Interface. It’s defined in PEP 333. Basically WSGI describes a Chain of Command design pattern; each piece of a WSGI application takes a request, and either acts on that request or passes it along the chain. The interface described by WSGI means you can plug WSGI apps (or as Pylons calls them, /middleware/) together in any order as you like.

Why is this useful? Well, it means you can take an off-the-shelf authentication handler to cope with 403 and 401 responses and take care of logins. One would only need to say “this is how you authenticate someone” and “this is how you ask the user for their password.” Other things are possible; Pylons ships with an ultra-sexy 500 handler that puts you in a DHTML debugger, complete with traceback and Python interpreter. (Of course such a tool is a giant security hole so it is easily turned off in production environments.)

So, that’s Paste. There’s a few special cases in there, though: PasteScript and PasteDeploy. They’re special in that they tend to be at the bottom of the stack – they’re specifically for launching WSGI applications, configuration of the application (e.g. authenticatoin details alluded to above) and connecting to the application (e.g. direct HTTP, FastCGI, and other connectors). I suspect that my diagram above doesn’t lend itself well to describing how PasteScript and PasteDeploy really work; it’s still a bit of dark magic to me. I hope someone else would be able to build on this article with their own that rebuts the errors and clears the grey areas.

In a Pylons app, you tend not to notice Paste, except when deploying (because you tend to run the command paster serve to launch a development environment). Pylons itself is mostly just glue. It’s a thin veil of a framework over the top of some very powerful supporting libraries but presents them in a convenient and well defined way.

When you create a Pylons app, you get your paste middleware built for you, and then the entry point for your app is created as a WSGI application too. So it sits on top of the stack, taking in requests, and sending out responses. Your app can define its own middleware, too, so you have a lot of control over what happens between your app and the browser.

The main components of a Pylons app are:

Pylons lets you swap out any of these components with your own, if you desire. I find Routes and Myghty to be powerful and flexible and friendly enough that there’s no reason to want anything else.

Your controller objects, like any MVC pattern, coordinate between the model and the view. An action performed on a controller retrieves some data from the model, possibly altering it, and renders that data using the template engine.

There are other parts, other libraries that you’ll see in a Pylons app, that aren’t represented here. WebHelpers is a library of convenience functions used in the template engine, for generating common HTML and JavaScript. paste.fixture is a web app test framework that takes advantage of the common interface of WSGI to allow one to test their application without requiring a full web server and socket handling. FormEncode handles form validation, useful from within a controller object. These are but to name a few.

Unfortunately there is a sore need for overviews like this one in the Paste and Pylons community; as stated earlier I didn’t fully understand the relationships myself until I came up with this diagram. Hopefully then, dear reader, you have a better insight into how this collection of names fit together, and can avoid the steep learning curve :-)